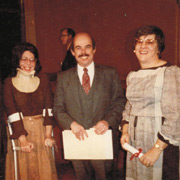 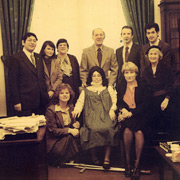 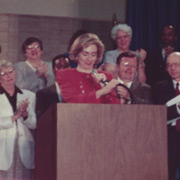 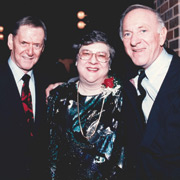 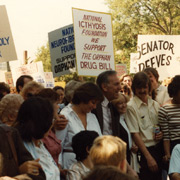 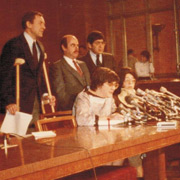 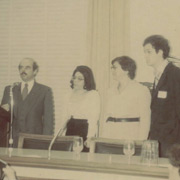 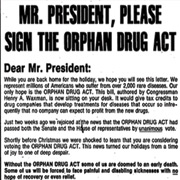 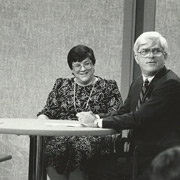 There are millions of people worldwide with rare diseases who are in need of accurate diagnoses and access to appropriate treatments. Many people share their stories and opinions with me. This blog is meant to give them voice so that together we can continue the global crusade for orphan drugs to treat rare diseases.

A colleague recently reminded me that I did not include in the book the role that NORD played in solving a medical mystery. During the late 1980's we received a phone call from the Centers for Disease Control (CDC) asking if we were monitoring people with different diagnoses. We were not monitoring them but when they contacted us about a specific disease we put them into our computer along with the name of the disease that they asked about. We did not know if they had the disease, or if it was a friend, relative or acquaintance who may have been diagnosed with the illness...
Read more ...
This web site is dedicated to telling the story of the Orphan Drug Act and how scientists, support groups, patients and companies stepped forward to ensure that the promise of the federal law would be achieved. That extraordinary success quickly became known throughout the industrialized world, and thus encouraged other governments to create their own orphan disease legislation.
Read more ...
Many people in the pharmaceutical industry today ask me questions about the origin of specific items in the Orphan Drug Act. The most common question is how and why we came up with the maximum population size of 200,000 Americans. I still have to chuckle to myself whenever I hear that question because no one could possibly imagine that the issue was decided in a ladies room on Capitol Hill. Other people would voluntarily give me their interpretation of specific items in the law, and I had to practice control of my temper because they were 180 degrees off base. Then there are those who tell me how they think the law should be changed, and I wonder why they would want to change something that has worked so well for 30 years?
Read more ...